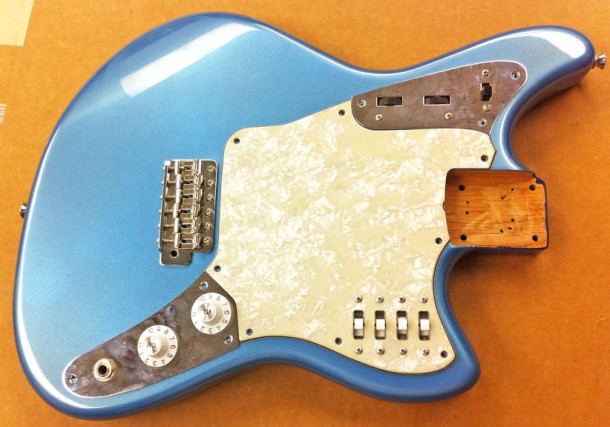 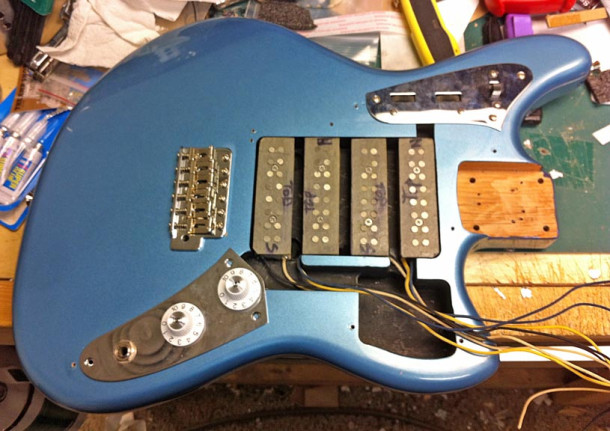 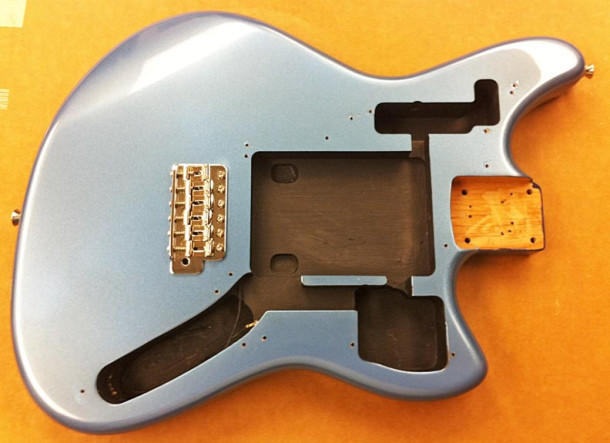 When Fender reissued one of its long-forgotten models, the Marauder, as part of the Modern Player series, I immediately thought it would be a great (and relatively inexpensive ) way to try to recreate the model as it originally appeared in the 60’s.

The Marauder was introduced in 1965 with hidden pickups. with Jaguar upper and lower control plates, a Strat trem and a switch plate housing four 3-way Mustang-style switches to control each of its four hidden pickups. Fender scrapped the hidden pickups and went back to the drawing board for the second series of prototypes. This version was a completely different beast with three Jaguar pickups in Strat layout, new chrome plates with tons of switches and a new Mustang-ish trem. Some even had angled frets.

I wanted to recreate the prototype version with hidden pickups to see why Fender made such drastic changes. A little research on the Federal Patent & Trademark Office site yielded the patent for the original hidden pickups. These were unlike anything Fender ever produced.

Based on the patent docs, all four pickups were wound the same number of winds for mass production purposes. The number 1 (bridge) & 3 pickups were standard wind with all polepieces magnetic North up. The number 2 and 4 (neck) pickups were reverse wound with all polepieces magnetic South up. Having the magnets with the same poles up apparently caused them to fight each other and raised the magnetic field. Each pickup had its own 3-way slider switch (On-Off-On) to allow them to be in and out of phase and in any combination.

I contacted Jared Brandon of Brandon Wound Pickups here in Columbus and he was up for the challenge. He sourced the magnets, hand-punched the bobbins and wound the pickups using what little information there was out there. The only difference I had Jared do was to wind the pickups progressively hotter as they approached the bridge.

While I waited for the pickups, my tasks were to route the body for four pickups, route the upper Jaguar control section and enlarge the lower switch area. I shielded all the routed areas with shielding paint to eliminate as much noise as possible. After a lot of routing wires and soldering, the end result is surprisingly good. Yes, the output is fairly low, but the ability to combine pickups in and out of phase makes for a lot of different sound combinations!